Blending Flamenco guitar with the music of our century, Pau is one of today’s most talented and interesting guitarists in Spain. His mastery of all musical languages and a proverbial good taste, turn his guitar into a fascinating instrument that expresses itself with the ease of a living being. Coming at the same time from the Classical, the Flamenco and the Modern guitar traditions, his original compositions mirror his unique approach to the guitar and to music. In 2015 he published his debut “Pau Figueres” (Whatabout Music) and in 2018 “Nada Nuevo Bajo El Sol” (Satélite K), both records highly praised by critics and listeners alike, and has performed them live through Spain, France, Germany, Hungary, Portugal, Greece, Switzerland and the United States as a soloist or with the Pau Figueres Group. 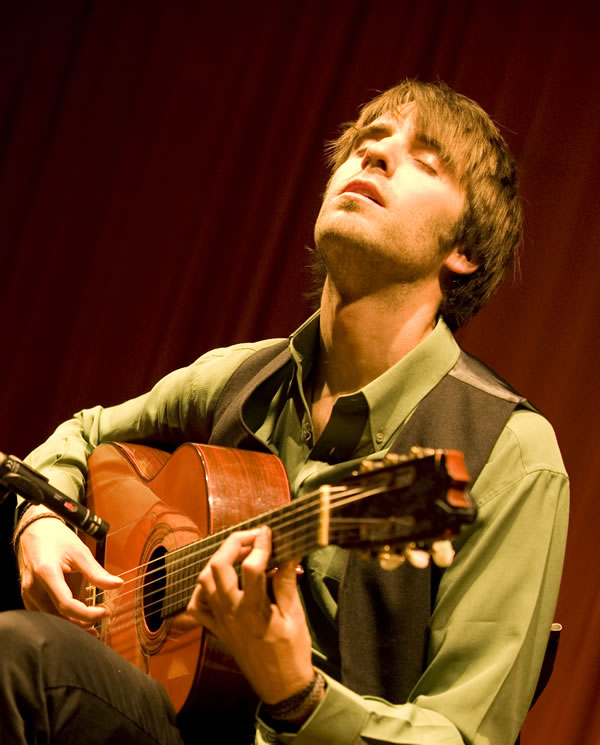 He started playing when he was 7 years old and started working as a live and studio guitarist at the early age of 16. Since then he has taken part in countless recording sessions and has collaborated with artists that vary greatly in terms of style and musical context. He has performed as a classical guitar soloist, as a soloist with an orchestra, in chamber music ensembles, rock bands, backing singers, in jazz, world music and pop bands, etc. He has played with some of the most acclaimed musicians in Spain and has performed and recorded all over the world (U.K., Spain, Germany, France, U.S., Canada, Mexico, Zimbabwe, Malawi, Finland, Russia, Portugal, Estonia, Romania, Italy, Greece, Austria, Andorra, Switzerland, Luxembourg, Dominican Republic, Peru, Paraguay, Uruguay, Argentina, Chile, Ecuador, Colombia, Panama, Costa Rica, Puerto Rico, El Salvador, Guatemala…)

He began to study classical guitar at the age of 8 and went on to do his Bachelors Degree in the Escola Superior de Música de Catalunya in Barcelona (ESMUC) under the guidance of Zoran Dukic, one of the most distinguished classical guitarists of our time. He finished in 2011 obtaining the highest qualifications. Hence, his technique has been carefully developed and is skilful and confident. In the classical guitar field has also studied with Vicenç Mayol, Laura Young, Àlex Garrobé and Feliu Gasull. In 2007 he won the Top Prize in the Professional Conservatory for Music of Badalona, in 2005 the First Prize in the Sant Anastasi Competition in Lleida and in 2009 he won both the Second Prize and the Audience Prize in the renowned classical guitar competition Certamen Llobet in Barcelona. He has performed twice as a sideman at the Latin Grammy Awards gala in Las Vegas, with Alejandro Sanz in 2019 and with C. Tangana in 2021.

He has studied Flamenco guitar with Rafael Cañizares, Juan Manuel Cañizares, Anton Jimenez and Diego del Morao, and in the modern music field he has studied jazz guitar with Dani Pérez and learnt directly from Horacio Fumero, Carme Canela, Gorka Benítez, Bob Reynolds, Ben Monder, Adam Levy and Wayne Krantz among others. As well as having received the best possible academic education, Pau has dedicated a lot of time to learning from other musicians and as a result of painstakingly listening to music, is highly selftaught in many aspects of his musicality. His technique is a mixture of the Classical and the Flamenco techniques (also embracing fingerpicking, the pick and the slide). He has a deep knowledge of the guitar as an instrument and of the art of making it sound.

Artists Pau has worked with: